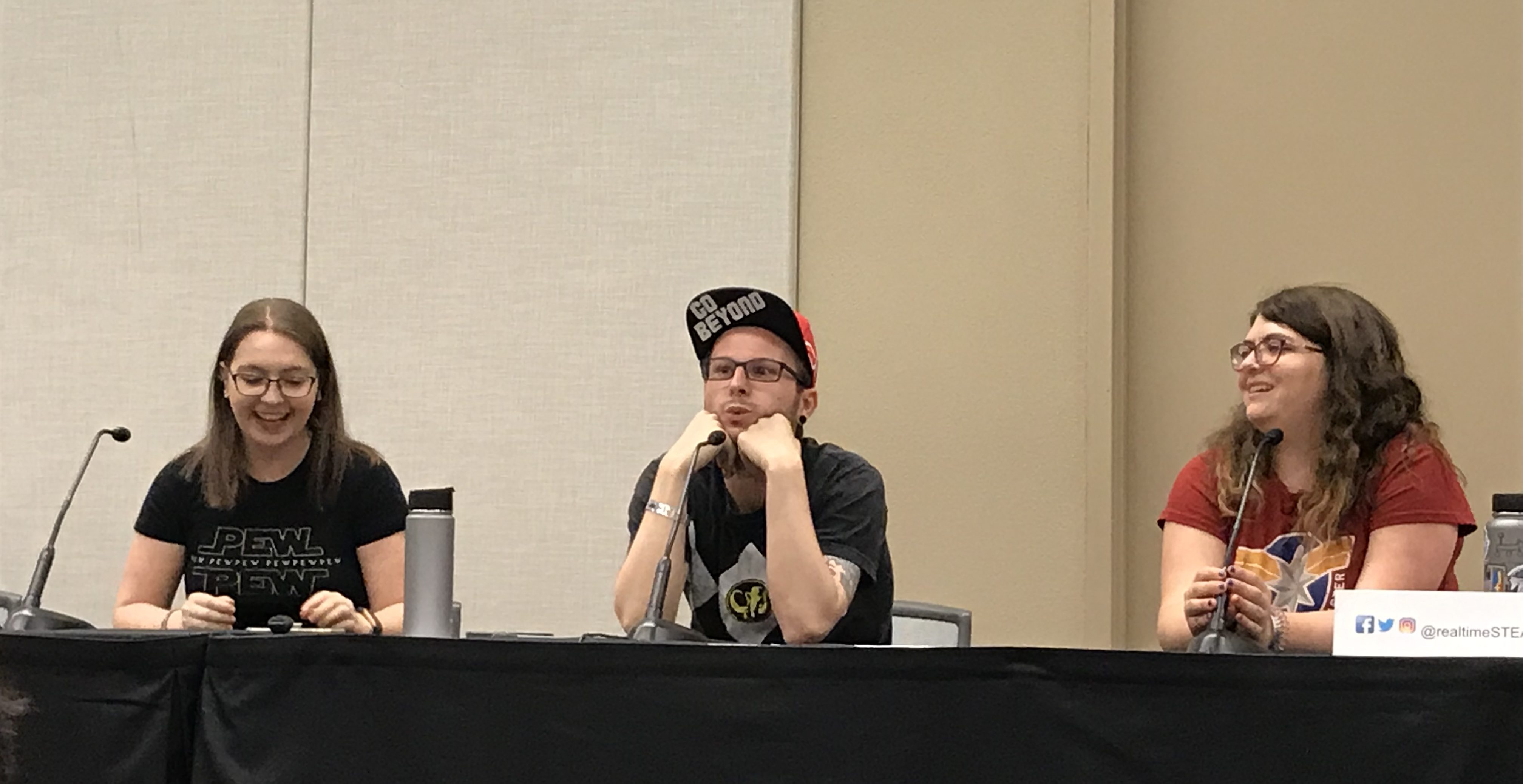 The first spring I was down in Arizona, finishing up my first year of graduate school, I had an unusual bout of adventurousness.

I had received an email about volunteering as a panelist at the Phoenix Comic Con. I’d never been to a comic con, or been a panelist for anything… In fact, as a first year graduate student, I didn’t feel I was all that much of an ‘expert’ in anything. Even so, I figured I’d send my information and see what happened.

Turns out, I did have enough expertise to be on a panel and I was scheduled to talk at two different sessions! You can read about my first comic con experience here.

Since then I have been excited to return to comic con, both as a panelist and simply as an attendee. With the whirlwind that was 2018, I opted out of volunteering last year, but this year I made it back! With previous panelist experience and two more years of graduate school under my belt I was ready to go for comic con part 2!

This year I was again on two panels; one about Captain Marvel and the other on AI and Machine Learning. The Captain Marvel panel was a breeze, I had a great time meeting with my fellow panelists, I got to make crazy (only slightly science based) claims about Captain Marvel’s power and learned quite a bit from both the other panelists and the audience. Did you know that linguists are using computational science to learn more about languages and translation?

The AI and Machine Learning panel was slightly more out of my comfort zone. Honestly, I volunteered for it because I would have loved to attend it, let alone be on it. My fellow panelists were actually in the machine learning field, using it to perform their own research. While I’d love to be able to do that as well, I currently only know what I’ve read about machine learning! A lot of my research deals with handling and analyzing large amounts of data but I have yet to use machine learning as a key part of my research. Even so, I dove into the uses of machine learning in astronomy hopefully giving myself a unique perspective to bring to the table.

It was a good discussion despite some of the cyber security bits going over my head. I was able to talk about how astronomy needs machine learning and ‘big data’ in order to process the massive amounts of data that are being collected by the new telescopes. I even had a few questions on how the telescopes themselves worked!

It’s a funny experience to “be the astronomer” in a group of experts. It’s assumed that there is some base knowledge you must know if you are an astronomer – constellations and black holes for example. More often than not, the assumed knowledge actually has nothing to do with what we actually do – nevertheless, we know it. There is so much of astronomy that rarely gets touched on because we are often focused on communicating this assumed knowledge rather than our own expertise. It’s because of that fact that I find it so amusing that, in a panel on machine learning (a topic actually tangentially related to my research) I was asked about telescopes; something – at least in relation to the other astronomers I know – I know nothing about!

To make the logistics a bit easier, and as something of a thank you for being on a panel, panelists with more than one panel are given a pass to the convention for the whole weekend. I was lucky enough to have both of my panels scheduled for Friday so once I had finished my panels, I was free to roam about the convention as a mire citizen. 😉

I’ve found there is a unique atmosphere at comic con. It’s a celebration of passions of sorts. There are so many different interests represented – from anime to gaming to pop culture to literature and comic books – it’s hard to understand every reference, recognize every cosplay or appreciate every piece of art you come across. However, everyone is just so enthused that it carries over regardless. It’s like “I may not get it, but I can see you’re excited and I’m excited that you’re excited”. While it’s true that a convention experience can be far from perfect when it comes to inclusion, it is clear that comic con is meant to be a place where people can be their authentic, passionate selves and have that be celebrated. That’s hard to find elsewhere.

Other than simply soaking up the hectic, but joyful, atmosphere, highlights of this year’s comic con experience included watching some fun improv comedy and attending the discussion with Adam Savage. Alex and I were reminded that we should get out to comedy performances more often, we really enjoyed them while in college. We also found Adam Savage to be an engaging, genuine, and inspiring public speaker, we were very glad we made sure to get to his panel.

What kind of passion would you be excited to find at comic con?