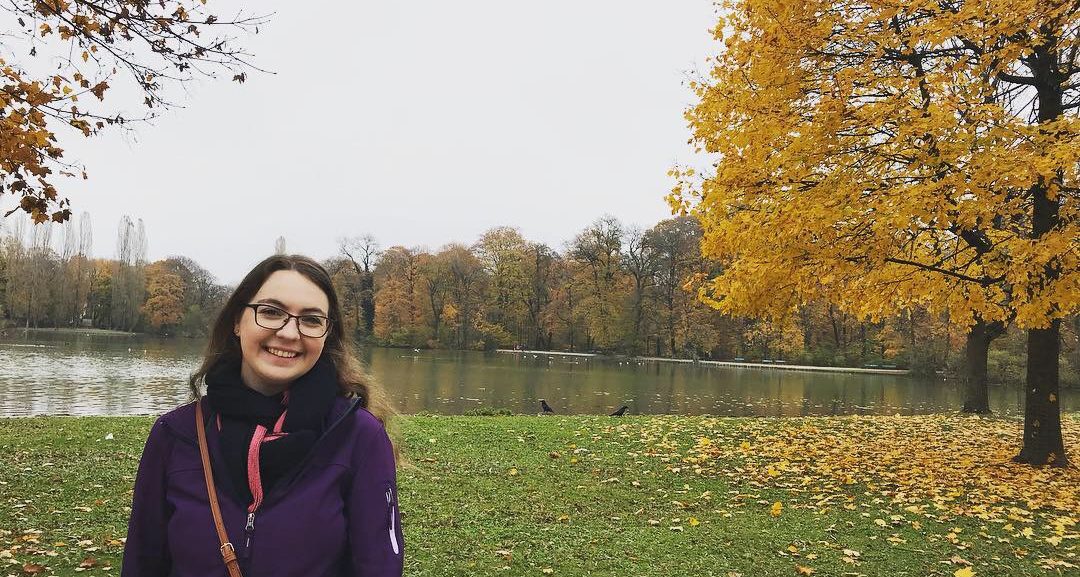 While it’s a bit late at this point – I wanted to write about my experiences in Germany this past October! The idea of a trip to Germany for me has been talked about between my advisor and his collaborator for a while now. They work together on a program that sends students to Germany over the summer to do some radio astronomy research and figured it would be productive for me to go too! I have been working on new simulations and they’ve thought it would be useful for me to be able to work with this collaborator in person. The two of them, happily, also both fall into the line of thinking that travel (for work and pleasure) is worthwhile and an opportunity you should take.

By the time I finished my qualifying exams, I was transitioning into magnetic field work. At the same time in Germany, a new postdoc was arriving who does the exact same thing! Also at the same time my local advisor was transitioning to a temporary position at NASA, requiring him to move east and leaving me to my own devices in Arizona. It made plenty of sense for me to go and work with the new postdoc and kick off my magnetic field research! So that was the ultimate goal – to get a good head start my new project by working with someone in person (who is also more knowledgable than both my advisors in this topic).

Overall, it was pretty successful. I was there for four weeks. With extra travel I ended up working for about three weeks. In that time I;  fixed a program that I had been troubleshooting for a month, tested the new code to prove it worked correctly, read up on work that has already been done in this field, planned out the simulations I was to run, wrote most of the introduction of a paper, and began running the simulations I needed. (I’ll be honest, that’s more than I’ve accomplished in the last three weeks before writing this post ;)) However! I went into more detail about that in a previous post. Instead, here I want to talk about the travel.

I was based in Hamburg but I got to travel to London, Berlin and Munich over the weekends! It was especially fun because my mom came across the Atlantic and we got to spend the weekends traveling together – something we hadn’t had the chance to do before. Hamburg was probably my favorite city over this trip. It was clean, friendly and had lots of interesting things to see. I spent both my first and last weekend just enjoying the city on my own. It was fun to wander around the downtown area, going in and out of malls, walking through cute streets and taking a stroll through the harbor. I got to spend one day going about the city with my mom as well. Since I spent so much time there, here are some of my favorite activities in Hamburg;  including the Chocolate Museum, the Elbphilharmonie, Planten un Blomen, and Miniture Wonderland. The Chocolate Museum was a bit of an ‘adventure’ activity. I had just found it on google maps while randomly looking around the downtown area and decided it should be something my mom and I should do – and it was wonderful! We learned all about how they make chocolate from the bean to the bar, we got to taste the bean/chocolate at each stage in the process and got to decorate our own chocolate bar to take home. The chocolate was delicious and the tour was a great way to spend the morning. Elbphilharmonie is the Hamburg concert hall that is actually at the top of a converted warehouse. The several story hall sits on top of an already 10-ish story tall warehouse that is now a hotel. With it’s unique architecture and awesome view of the harbor, it’s a very popular place to go to just to go up to the plaza and look out. I only wish I could have seen a performance there. Planten un Blomen is a beautiful city park in the middle of Hamburg. In every city I go to I usually make a point to go to any big park they have there. This particular park is a gem because it has several different ‘gardens’ within it making up the larger park. From botanical gardens in a very humid greenhouse to a sweetly landscaped rose garden and from a traditional Japanese garden to paved paths through the regional plant life. I spent many hours walking along the paths listening to my audio book(s) and enjoying the scenery. Miniature Wonderland could draw anyone to Hamburg all on its own. Despite it being very popular – it’s location and lay out is not quite what you would expect. After going up to the third floor of what feels like an old factory building, we still had to go through all of the exhibits to get to the ‘beginning’. Once we made it to the start we were immediately immersed in the tiny landscapes and scenes laid out in front of us. The small trains and cars going along their tracks are mesmerizing and we could stare at each section for an hour and still be finding something new. We absolutely loved it there, especially the miniature airport. It’s definitely my list to see again. London was the meeting place for my mom and I. She flew in to London from the US and I flew in from Hamburg. We had both been to London independently but never together so we took a few days to show each other some of the parts of the city we liked most. My mom took me to Hotel Chocolate and I took us on a walk along the river past St. Paul’s Cathedral. We both enjoyed taking in the atmosphere and finding new delicious places for afternoon tea. A lot of our time was spent in Covent Garden with all the options for tea and the cute shops to look through. We also went to the Harry Potter Experience – riding the underground, a train and a bus to get there! It was so interesting to see all the different sets next to each other when they are completely unrelated – Dumbledore’s office next to Hagrid’s hut, next to the boy’s dormitory. Seeing the scale model of Hogwarts couldn’t be described as anything but magical. Berlin was the next stop after London. I felt that if you’re going to Germany for any stretch of time, you should make it to Berlin. The city was also on my German advisor’s the list of places to go when I asked him where I should spend my weekends. It was such an odd experience to be somewhere with so much history in just the past 100 years. Buildings felt old but looked new and anywhere you looked there was a reminder of WW2; a memorial here, a refurbished building there. My mom and I went on a segway tour – it ended up being just the two of us and our guide – and it was a great way learn some history and get a feel for the city. We saw the Berlin Wall and visited the Holocaust Memorial, which is bluntly and truthfully named the Memorial to the Murdered Jews.

We also spent the majority of our second day there at the Germany History Museum where there is an entire floor devoted to the World Wars. Our time in Berlin felt very introspective.  The whole place had a sense of seriousness and responsibility about it that was hard to shake. Munich was the last stop for my mom and I before she headed back to the US. There was such a stark contrast between Munich and Berlin. The atmosphere felt more laid back and jovial. While there was evidence of Munich’s central role in the World Wars, the history you see around town focuses on the things that survived war, rather than reminders of it. Our visit started with another segway tour around the city proving again that it is a great way to get your bearings. I mostly took note of the pretty trails and parks we rode through that I wanted to go back to. We wandered the Englischer Garten which is one of the largest city parks – larger than Central Park in New York City. It was amazing to see all of the landscaping and know, in the style of an English Garden, all of it was planned and planted by hand. We also visited the Deutsches Museum – the largest science and technology museum in the world. We only saw 5 of the 35 exhibits (the Astronomy, Cosmology, Time Keeping, Computer Science, and Physics exhibits of course) but I loved it. Most of the time I had to play with a demonstration for a minute or two and figure out what it did, because I couldn’t read the German descriptions! In a way, that made the tour through the museum a series of puzzles I wanted to solve. The cosmology exhibit is one of the best I have seen, it outlined the key times in the lifetime of the universe and explained (in English!) how we’ve studied each and why they are important. All in all it was a good trip. It was productive, fun and a new adventure. It was the first time I had traveled so far and so long all by myself and it was the first time since we started dating that I had been in a separate country from Alex (which was hard when we had just gotten married!!). Being in a country that speaks a different language than I do was quite daunting, and it was even more apparent since I stayed there for so long. To be honest, it demonstrated how shy I can be and how nervous I am about embarrassing myself by looking like I don’t know what I’m doing. At the same time it gave me the opportunity to learn from those experiences, to feel capable on my own, and to enjoy and be comfortable in my own company. It was the first time I’d gone to Germany, somewhere I’ve wanted to go since high school, and the first time I’ve been able to travel Europe with my mom. I love spending time with my mom. I found myself appreciating the fact that I never though twice about whether I would enjoy spending a week and half straight with my mom… I knew I would and I did. It was such a great experience to share traveling to new places and I look forward to doing it more in the future.