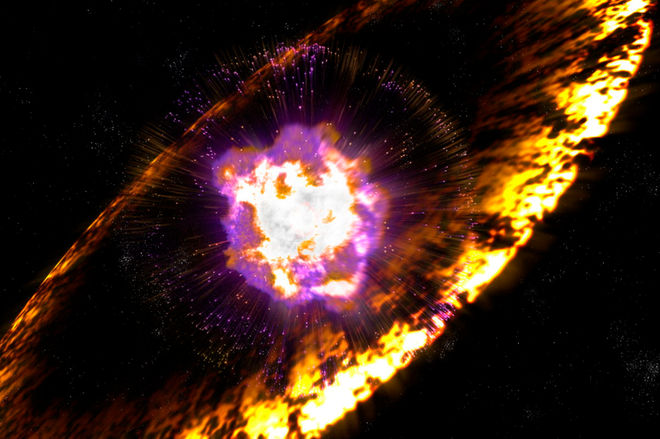 Getting to Tempe and starting the new semester means beginning research! For me, that means getting acquainted with setting up and running problems on a super computer!

The first problem I ran was the Sedov-Taylor Explosion. Now, you may wonder as I did, what is that?

Imagine you have a tank of water; a material of uniform density, pressure and temperature. Then, spontaneously, the point in middle of the tank has extremely high pressure. What would happen next?

The region of high pressure would expand outward. Very quickly. BOOM! You’d have an explosion!

In 1950, G.I. Taylor determined a relationship between the energy, radius, time since explosion and density of the material. He refined the relationship with Sedov’s experimental findings, leading to actual, albeit complicated, algebraic solutions for the form of the explosion.

Fun fact: Taylor used a declassified photograph of an atomic bomb blast to test his equations and determine the yield. His result was quite accurate which resulted in some controversy because the actual yield was still classified.

What does this mean for me? The code I get to run breaks space up into blocks. These blocks represent a portion of the space I’m interested and the code keeps track of all the values I might be interested in and what may affect the blocks around it. If one block has a very high pressure, on the next time step the blocks adjacent to it will be affected by that high pressure.

As more things happen, for example the temperature changes quickly, the space is broken into smaller blocks so the resolution gets higher. The simulation starts with the tank of uniform density and pressure and lets the space evolve with time. The spatial resolution changes as the explosion moves outward.

Here is a short video of a simulation of the Sedov-Taylor Explosion. [Made by someone who is not me, though I have made very similar plots] This shows the density of the material. The highest density is at the outer edge of the blast, as the explosion pushes material out of the way. Inside the blast there is very low density, one hundredth of the original uniform density!

Needless to say, I’ve been enjoying ‘blowing stuff up’ as I get familiar with my research tools.

5 thoughts on “BOOM: The Sedov-Taylor Explosion”